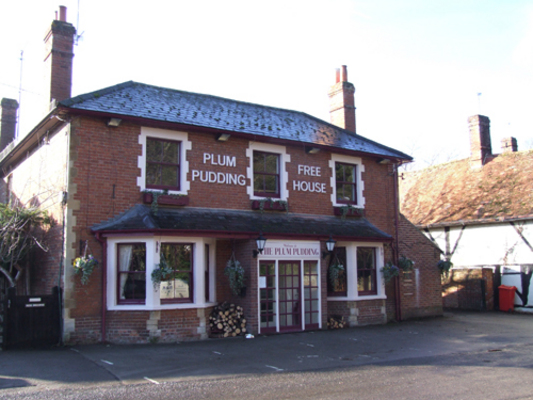 The Plum Pudding serves at least four real ales from local and regional brewers and offers a lovely warm, relaxed atmosphere in which to enjoy a pint (or two!) and a bite to eat.
Where possible the menu will be based around good fresh local ingredients and will feature pork from the Plum Pudding pig, we will also have a great selection of specially made sausages served with different mashes and succulent onion gravy. There will be a good selection of light lunches for those that need to rush back to the office.

We also have a good selection of wines and malt whiskies, and the beers change regularly.
The Plum Pudding was previously a Greene King Tenancy called The Admiral Benbow but has now been purchased as a freehouse and will be updated and transformed over the next couple of years. The name Plum Pudding derives from the Oxford Sandy & Black Pig sometimes referred to as the “Plum Pudding Pig” and is one of the oldest British pig breeds, it has existed for 200-300 years, especially around Oxfordshire.

We welcome you to The Plum Pudding all year round whether you are enjoying a pint in our wonderful walled garden or warming up with a coffee by the fire in winter.

“We called in to this pub for lunch on our way to the south coast for a weekend break. A very warm welcome awaited the give of us 10 13 two adults and our puppy Henry. We all enjoyed some excellent food. The ham egg and chips was enormous and I can personally vouch for the burger. Lovely dog friendly pub great food and excellent service. ”

To see special offers or save your favourites, login or create an account