I know it’s not a nice subject but I find myself getting increasingly annoyed by silly comments made by people in an atempt to justify why they don’t pick up their dogs mess.  Like most people I used to believe that the worst thing about dog poo was stepping in it or getting it on the wheels of pushchairs or bikes but after some research I’ve discovered there is a far more sinister consequence and there is not such thing as leaving dog poo to break down “naturally”.

Here are the top 5 things you should know

1, The eggs from roundworms, Toxocara Canis, are deposited with the feaces and embryonate (becoming infectious) 2-3 weeks later. They can be viable for up to 10 years in the soil and are resistant to disinfectants and to the frost. Each toxocara canis female can lay 700 eggs per day and are only visible under a powerful microscope. If ingested by humans and untreated can cause infections to your organs most commonly the brain (nervous system), liver, lungs and your eyes causing tumours and detached retinas and can lead to blindness.

2, Dog poo does not act as a fertilizer, when it breaks down it leaves toxins in the ground which are harmful to other animals, humans and the environment. In the past farmers have been blamed for poisoning the land and rivers but it has now been proved that leaving dog waste on farm land can lead to sheep being infected with Canine worms, which doesn’t have an adverse affect on the sheep but if humans then eat the infected meat can lead to cysts on the liver and lungs which have to be removed surgically.

3, Dog poo being left to wash into rivers and seas is the equivalent of pumping our raw sewage into the water. It is estimated that 20-30% of stream pollution is caused by the toxins from dog waste being washed in to the water system causing a build up in algae which is harmful to fish and by infecting the water with E-Coli, leading to the closer of some beaches.

4,  It has been estimated that for watersheds of up to 20 square miles draining to small coastal bays, 2 -3 days of faeces from a population of 100 dogs would contribute enough bacteria and nutrients to close a bay to swimming (US EPA, 1993)

5, In America and Canada scientist are investigating ways to get a useful end product from dog waste, be it fertilizer or energy, a much better option than landfill.

As one learned journalist said “If you think stepping in it is bad, try drinking it!”  Makes you think doesn’t it. 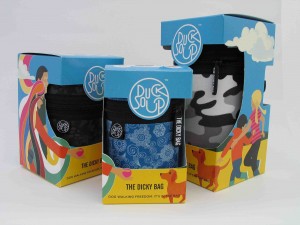 Almost a quarter of households in the UK own a dog and while anyone with a dog knows the joy that ownership can bring, there is mounting evidence that our four legged friends really can make us healthier and happier, with some of the greatest benefits seen amongst older people. Research at Michigan University has shown that when those aged over 65 keep a pet such as a dog they need to make 30% fewer appointments with their doctor compared to their counterparts without a pet. Here we consider how having a dog can lead to improved physical and mental health for people in their later years. 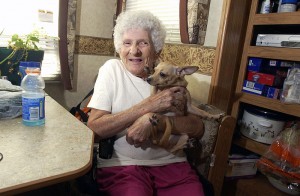 Physical benefits of exercise
The health benefits of regular exercise amongst older adults is well documented and research shows that this is one of the best ways to preservephysical health and extend life expectancy. Daily walks with your dog are an obvious way to boost fitness, as well as bringing down blood pressure and cholesterol, which are often raised amongst the older population. In fact, dog owners are also more likely to survive a heart attack, which remains one of the biggest killers in many developed countries. However, exercise with your pet does more than boost the health of your heart and lungs; your joints, bones and immune system benefit too, which can all be weakened by old age. Walking each day can help to keep your joints supple, benefiting anyone irrespective of whether they have arthritis; this is one of the most common health problems affecting older adults. At the same time regular weight bearing exercise maintains bone density, helping to ward off osteoporosis, which affects one in three women as they age. Our immune system is also strengthened by moderate exercise, which reduces vulnerability to infections and cancer, both of which are more prevalent amongst the elderly.

Positive impact on anxiety and mood
Anxiety is increasingly diagnosed amongst older adults and may occur as a consequence of a medical problem such as dementia, or relate to isolation or difficulties in managing all that they once were able to. Pets can be one way in which people can manage anxiety and complement more traditional therapies. For instance, it has been demonstrated that someone with Alzheimer’s disease is less likely to be anxious if they have a pet at home. However, it’s well documented that dog ownership can also help to reduce the impact of stress, which itself can lead to feelings of anxiety. Petting a dog has been shown to reduce levels of cortisol and noradrenaline – two of the stress hormones – as well as lowering blood pressure; caring for a dog for a 3 month period led to significant fall in blood pressure. As well as reducing these negative factors, stroking a dog triggers the release of dopamine and serotonin, which lead to feelings of calm.

These two feel good hormones work alongside oxytocin, which has been shown to be released through just spending half an hour with your dog, to combat problems with low mood; this could certainly benefit the quarter of older adults with depression sever enough to require treatment. Another way in which dog ownership is thought to benefit mood is through the way in which it helps to distract us from other things that we might have on our mind. It can additionally help to add routine to someone’s day, which after retirement can sometimes feel empty, and can be a contributing factor to reduced mental well-being.

Companionship
According to Age UK around 3.8 million older people live alone, which can lead to feelings of isolation, particularly when family do not live close by or they have lost close friends. In these situations owing a dog provides companionship, but also encourages them to get out and about each day, which is a great opportunity to interact with people in their communities; you are more likely to see your neighbours and it is easy to strike up a conversation with other dog walkers. As such, a dog can help to increase the quality of life for an older person living alone.

With its many hills, mysterious woodland, wild moors and burbling rivers the Peak District is a dog’s paradise; and it’s not a bad place for a dog owner to explore either.

These geographical aspects, together with myriad dog-friendly holiday cottages to stay in and pubs to eat at, make the Peak District a smashing holiday destination for dog owners and their loyal companions.

If you are considering a break in the Peaks this summer, the sheer number of places to visit and great walking trails to explore might make it difficult to decide which part to choose. So, to get you started we have pick three of our favourite dog-friendly areas to visit that provide fantastic walks.

Located in the heart of the Peak District park is the village Hathersage. This is the perfect base for those who want to combine exploring the Peak’s literary past with long walks. Hathersage was not only the inspiration behind several of the locations in Charlotte Brontë’s novel Jane Eyre, but legend has it that it also has strong connections with Robin Hood. 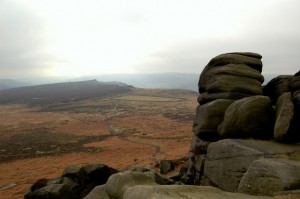 If you’re based in or near to Hathersage head to St Michael’s church where one of the most famous of Robin Hood’s merry men, Little John, is said to be buried. According to legend, Robin Hood also has roots in the area and was born only 8 miles away in Loxley.

Venturing out of the village and into the surrounding countryside you will find many intriguing connections to the legend with places like Robin Hood Cave north of the village. If you head west of Hathersage you will pass Robin Hood’s Stoop at Offerton Moor and Robin Hood’s Cross on the nearby Abney Moor, be aware however that on sections of the moors, dogs are only allowed on the public rights of way and you should remain vigilant about the livestock.

Charlotte Brontë visited Hathersage in 1845 and when writing Jane Eyre she choose to base the village Norton on it, as well as using the surname of the leading local family of the time, the Eyres, for the surname of her heroine. Head 3km out of Hathersage and you will come across North Lees Hall, an Elizabethan house said to be the inspiration for Thornfield Hall in the novel.

The Peak District has a split personality: the White Peak in the south and the Dark Peak in the north. The Dark Peak is the wilder, less inhabited part of the Peaks and it also has some of the best walks this National Park has to offer, including those your dog might enjoy the most. 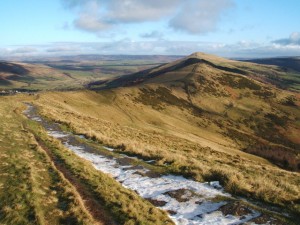 The Edale Valley is a great place to base yourself if you want to explore the Dark Peaks. Edale is surrounded by hills which not only provide excellent walking trails but also some great views over the landscape. There are numerous walks that can be tackled within a day, however some can be quite challenging, and you can expect to find a range of terrain from woods to moors. Head north of Edale to explore the popular hiking territory Kinder Scout, while there are also popular walking routes to the west and east to discover as well.

If you are looking to take your dog on a longer walk you can choose to tackle part of the Pennine Way, which starts at Edale Valley. This National Trail covers 268 miles along the Pennine Mountain tops and heads north through the Yorkshire Moors and ends beyond Hadrian’s Wall.

The Peak District is home to some of Britain’s most famous stately homes, most notably Chatsworth House. This stunning country house has been used as the backdrop for numerous Hollywood films and television series. If you fancy a more sedate stroll with your dog, then the Chatsworth grounds offer up ample territory. 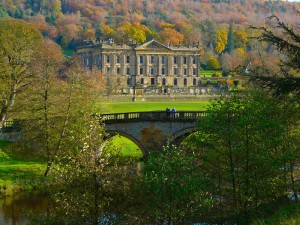 If you are based in or near the village of Rowsley you are within easy walking distance of Chatsworth House. The walk will take you across fields, over scenic bridges and through small woodland areas.

Once at Chatsworth House you can explore its 105 acre garden that includes permanent sculpture displays and a renowned waterworks, including a 300-year-old Cascade, the trough waterfall and an enormous gravity-fed Emperor fountain. As well as this there is a 1000 acre park to explore that includes a large woodland area that provides great views of the house and gardens. Dogs are welcome in both the gardens and park, but must be kept on a lead. Enjoy!