They’re not necessarily the types of creatures we pay too much attention to usually, and as a consequence their habits, nocturnal and otherwise have until now been shrouded in mystery…

However a new short film released today to coincide with a comprehensive report undertaken by the University of Exeter has captured the journeying habits of these gastropods.

The ‘Slime Watch’ report and documentary saw researchers track the nocturnal activity of 450 garden snails using LED lights UV paint and time lapse photography over the course of 72 hours, with some fascinating results.

The researchers, led by Dr Dave Hodgson, Associate Professor of Ecology at the University of Exeter found that snails will travel distances of up to 25 metres in a 24-hour period, and seek out areas of shelter, such as long grass, trees or objects, including dogs’ toys, left in the garden overnight.  The four researchers from Exeter University also discovered that snails move in convoys, piggy-backing on the slime of other snails to conserve energy. It is thought that a snail could use up to 30 per cent of its energy in slime production alone.

The study was commissioned by the Be Lungworm Aware campaign as a resource for dog owners, whose pets are at risk from a potentially fatal parasite spread by slugs and snails, the lungworm Angiostrongylus vasorum. The parasite is contracted when dogs accidentally swallow even the smallest slugs or snails, which can be found in dog toys, puddles and long grass.

The Be Lungworm Aware campaign is calling on pet owners to be aware of the dangers of lungworm. The research shows that garden snails not only travel the length of the average English garden in a night, but often find shelter in shady areas. Luke Gamble is urging all pet owners to be more vigilant, making more of an effort to pick up toys in the garden so they are not left out overnight, regularly clean water bowls, always pick up dog poo and use a preventative medication.  If pet owners have any concerns they should always speak to their vet.

So if you’ve ever been curious about what the snails get up to in your back garden now’s your chance to find out.

This month we have teamed up with Duck Soup Company, the inventors of the Dicky Bag, who now offer a full range of other fabulous neoprene products, to make life that little bit easier! They are very generously offering one lucky Good Dog Guide winner a set of their ingenious products, there’s something for every member of the family, from the pooch to the new born baby!

The material Neoprene, they use to make their products is also used to make wetsuits, it’s durable, lightweight, waterproof and washable, airtight and leak proof, making it perfect for a full range of products that can be used for dog owners and everyday family use.

For Dog Owners
The Dicky Bag – A carrier, with odour prevention devices, to put those awkward plastic bags containing dog’s poop in until you get to an appropriate disposal point – leaving your hands free and prevents inappropriate dumping of plastic bags of dog waste in the town or countryside.
Dicky Treat Bag – Ideal for storing clean pick up bags and dog treats. It is easily attached to your dogs lead and saves having every coat pocket stuffed with plastic bags and biscuits.

For the Family
Hugo and Barney – Two different sized bags which include a shoulder strap, as well as two loops cleverly positioned for you to be able to attach in a multitude of ways such as to your buggy, bicycle, bag and rucksack. The flexible, lightweight and slimline designs will be invaluable for on the go mums, packing picnics, lunches and beverages, with it’s thermal properties are advantageous for keeping food and drinks at an ideal temperature. Also perfect for swimming gear, sports kits, muddy shoes and even nappies.

Butler – The lightweight and slimline design is invaluable to pack your growing child’s drinks for school, a healthy snack lunch of juice and fruit for a trip to the park and so much more.

Matt – The non-slip mat is warm, hygienic, durable and quirky – perfect for changing your baby’s nappy, keeping dry on a wet floor or as use for a shower mat at the gym.

For your chance to win the full set of these amazing products just complete the form from this link. This competition finishes at midnight on August 31st 2013

I’ve been planning on taking my dog away. He’s a Glen of Imaal terrier called Jeff and I really don’t want to leave him in the hands of a kennel or pet hotel. The pet passport has meant that it’s so much easier to keep your pooch with you at all times. There is nothing worse than getting home from a holiday to a stroppy dog who is moping around because he thinks you’ve abandoned him.
It’s not as easy as just hopping on a plane with your dog and hoping for the best. It took a fair amount of planning to get everything arranged for the trip. I decided to take Jeff to Lanzarote, so did some research into which of the hotels on the island would allow pets, deciding in the end on the hotel Iberostar Papagayo in Lanzarote. It took me a while, so do ring around to find a hotel at your chosen destination that allows pets in the rooms.

First thing first was to make sure Jeff was ok to travel. He’s only three, so in the prime of his life. Older pets may have issues with the travel and change, so go to your vets to make sure. You’ll need a record of vaccinations, plus a microchip in case your dog wanders off anywhere when you are away. 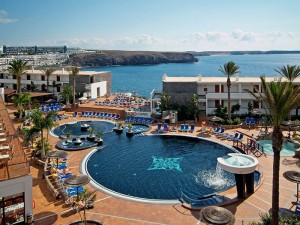 Check your airlines reputation for pet travel. There have been horror stories about a certain American airline’s way of handling pets in transit. Ensure that the carrier you have for your pet is the right size. Too big or too small could cause issues. Don’t leave your pet on the lead in the carrier as they might end up choking themselves.

Food can be an issue in foreign clines, especially if you have a fussy pet like I do. Jeff refuses to eat anything apart from the best steak or Iams, so I had to pack enough for the week. You will also need to make sure that your pet can deal with the water if you go somewhere with dodgy plumbing. Take water from home and mix with the local tap water to get their stomach used to it, or just give your dog the same bottled water that you have. Bottled water is generally much cheaper in hot countries than the UK, thankfully.

If your dog has a long coat, you can get them a haircut before you go, but be prepared to get some funny looks off people if like me, your dog ends up looking like a demented tiny lion with a trim.