The age-old debate concerning which animal is the best, cats or dogs, was brought back into the limelight recently as scientists proclaimed that cats are better at surviving.

Although this is good news for one proportion of the nation, dog lovers, including us, will no doubt cover their ears and refuse to take the news lightly.

So as the debate continues to divide opinion, we’re taking a look at what the main differences are between these two popular animals and stating why we think that dogs come out on top!

A Man’s Best Friend
Did you know that dogs are the third most popular pet to own in the UK? Our four-legged friends are sitting comfortably behind tank and pond fish, who take first and second place respectively.

Where’s the fluffy feline we hear you ask, well they take the fourth spot after dogs. That means that if this was a podium finish, the cat wouldn’t even appear victorious on the stand.

Statistics also highlight that between 2012 and 2014 there were nine million dog owners and 8 million cat owners in the UK, leading us to believe it’s the dog who is man’s true best friend.

The Differences – Cats Vs Dogs
There are a number of distinct differences between these two animals and, of course, siding with dogs, some of these include:

– Dogs instinctively protect their own territory, whereas cats won’t defend your home
– Dogs are more loyal to their owners compared to their feline opposition
– Dogs can be trained quickly to react to commands, whilst cats are harder to train

Protective, loyal, and easier to train, these three differences alone reflect some of the reasons as to why dogs make for great pets and why they should win the battle once and for all.

Have Your Say
So where do you stand? Do you agree with what we have to say, or have you always preferred cats over dogs from a young age?

Before you cast your vote, take a look at this scrolling cats vs dogs interactive Infographic to help you decide.

Once you’ve clicked on the cat or dog, you can view the results calculator at the end to see what the nation has to say. 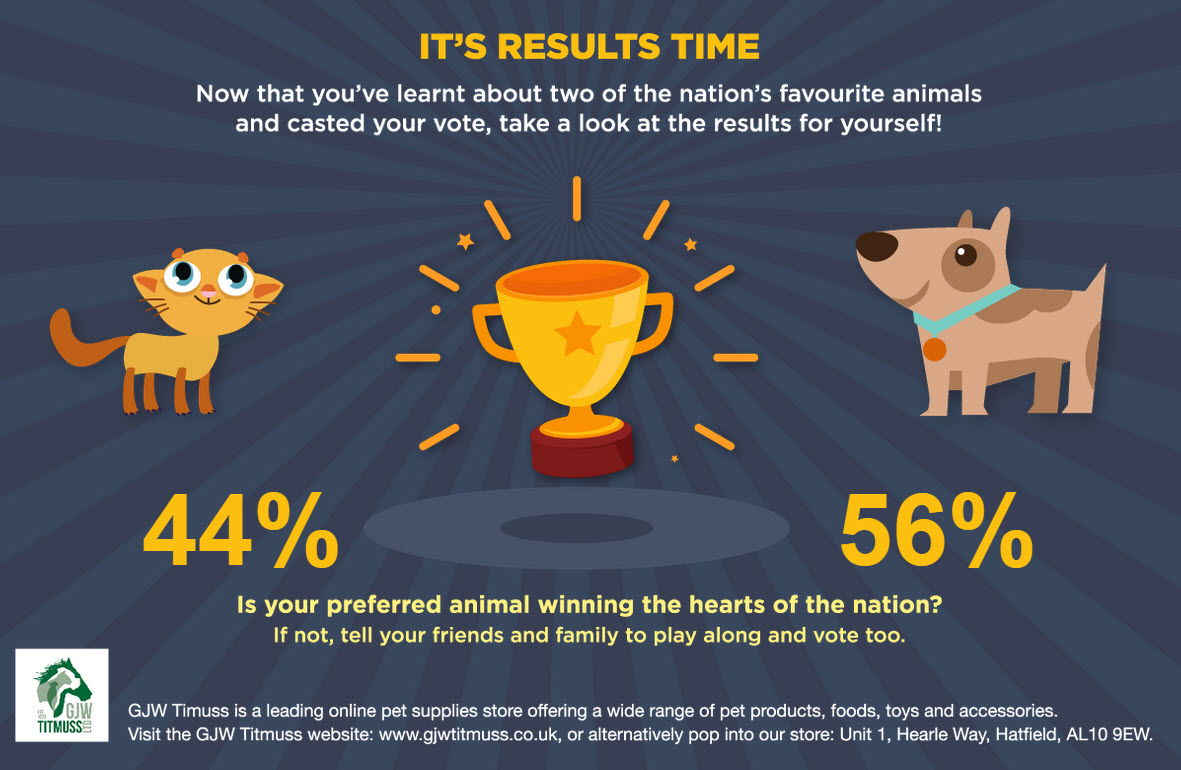 Chances are if you understand the above, you’re a Cumbrian. And if there’s one thing us Cumbrian folk love, it’s our pets! In fact, Cumbria is home to the country’s most dog friendly town, Keswick, and is famed for its dog friendly establishments and dog friendly attitudes.

As you’d expect from a county of die-hard pet lovers, there’s a whole host of local pet businesses – so many in fact that it can be hard knowing where to begin! This is where we come in, Pets in Cumbria is a dedicated pets website, helping fellow Cumbrians with all of their pet related needs.

Our pages contain everything from local pet news and advice articles, to pets for sale, pets for rehoming, pet services & supplies and recommended veterinary practices. We also hold regular competitions where you can win LOTS of pet prizes; we believe every pet deserves to be pampered now and again.

Ps. For the non-Cumbrians among us, a jewkle is a dog and a ‘orse is a horse!

• The film coincides with the launch of the Get A Dog campaign to inspire families to adopt a dog and make the most of their summer.

Today our nation’s children are spending more time on technology than ever before, resulting in less family bonding and an impact on physical health. The UK’s largest dog welfare charity, Dogs Trust is making the issue a top priority by highlighting the benefits of dog ownership for the whole family. 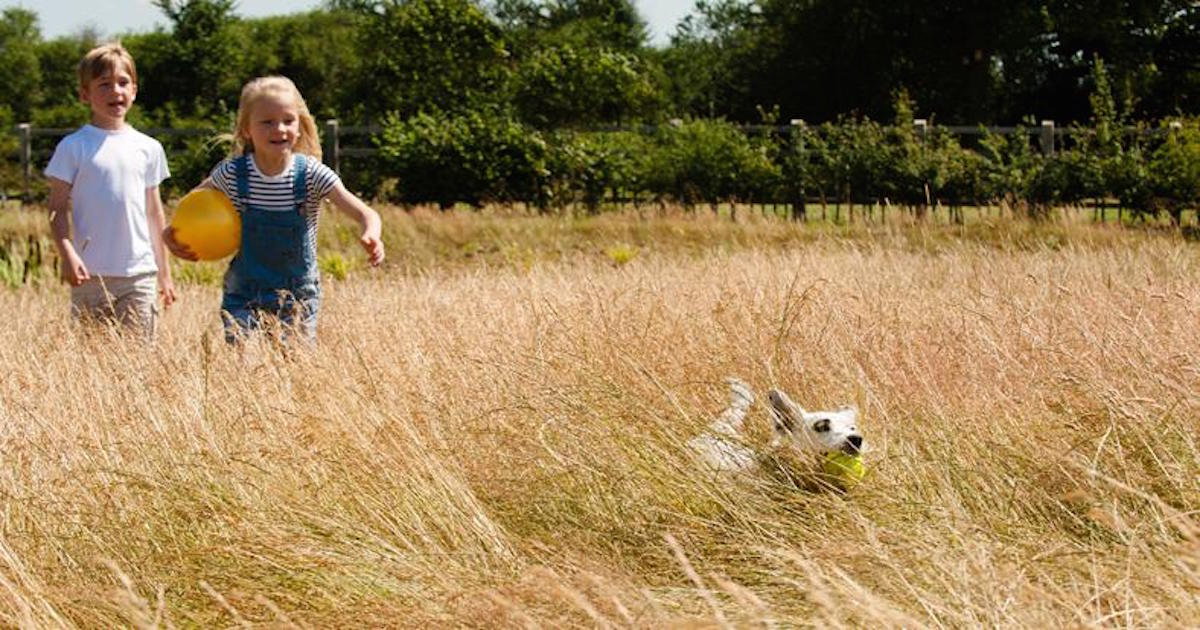 A survey by Dogs Trust found that parents cite the family dog as a distraction for children that are ordinarily glued to tech. 42% say the family take more exercise thanks to the pet and nearly half view their dog is their child’s best friend. The survey also asked parents about their own childhoods and found that, overwhelmingly, growing up with a dog is seen as a positive part of their childhood.

The survey also asked current parents about their own childhoods and found that overwhelmingly growing up with a dog is seen as a positive part of their childhood:

• 69% of parents surveyed grew up with a dog and of those, 93% believe their family pet enriched their own childhood.

• Of those surveyed who felt their family dog enriched their childhood, 39% said it taught them responsibility.

• Now that they are parents themselves, over half (54%) of those polled who had a pet dog when they were younger now have one for their own children

• 43% of those who have dogs now have sentimentally chosen the same breed they had when they were growing up.

Dogs Trust launches their Get A Dog campaign to inspire families to start making technology-free memories this summer by adopting a dog. The charity has created a comedic video with Don’t Panic that demonstrates the humorous inadequacy of an iPhone or Xbox, compared to the genuine fun that can be had with a pet, and encourages parents to consider getting a family dog.

Owning a dog as a family can be extremely rewarding as dogs can act as companions and support for children. They provide them with a sense of responsibility as they get involved with their daily care and understand the commitment, and children with dogs are often more physically active, playing with the dog and taking them for walks, which can help with health related issues.

Dogs Trust Chief Executive, Adrian Burder, comments: “The summer holidays are a fantastic time to introduce a new dog to your family because the kids are around to enjoy those special first months together. It’s time to put down the iPad and walk away from the Xbox and… get a dog. Dogs Trust has 20 Rehoming Centres across the UK, full of rescue dogs ready and waiting to start making memories with you and your family.”

Just what do we need to know to make sure our pets are happy and healthy in the summer months? All too often it’s obvious things that get forgotten, from hydration to parasite protection to heat stroke.

Hydration is absolutely key in the warmer months and it’s advisable to make sure that you not only keep their usual bowl topped up, but also consider having other water bowls accessible to encourage your animals to keep hydrated.

Try to walk when it’s cooler so before 11am, or after 3pm.  Make sure you pick up a travelling water bottle, so you can give them a quick drink to stop your dog from overheating.  Most important, make sure you check the ground isn’t too hot for your pet’s paws. Parasites thrive in warm conditions therefore it’s important to keep your pets protected from parasites all year round and particularly in the summer months. Your pet can be subjected to parasites more frequently in the warmer conditions, and they can easily be picked up in whilst enjoying a walk in the countryside or visiting your local park.