Hi All, lets have a quick look at breed specific traits and behaviours. I have written this article to give owners both new and old and indeed potential owners some basic knowledge that will help them understand a bit about what I think is a major influence on many modern dogs behaviours. A few examples of the many breed specific traits and behaviours would be the Collie to herding, the Rottwieler to guarding, the Husky to wanting to pull, the Staffie to loving people or the Labrador retriever to a good temperament.

When we talk of breed specific traits and behaviours what we should really be saying is that dogs from certain breeds will have a genetic predisposition to carry out certain traits or behaviours, it is in their genes (known in behavioural terms as the genotype), but whether these genes actually become expressed and ultimately become part of the adult dogs actual observable appearance/behaviour (known in behaviour terms as the phenotype) will be profoundly influenced by the environment and early learning that the dog goes through. Let’s have a couple of simple made up examples of the above to explain it.

1.A Staffie is taken as a pup at 8 weeks from a litter of five with mum and dad present, from a loving family home breeder having experienced a safe and stimulating environment throughout with good experiences with all people he came across. This good work was carried on by the new owners family with ongoing good socialisation and the end result is a well balanced dog that loves people, as most Staffies do.

2. A Staffie is taken as a pup at 6 weeks (too early) from a puppy farm having experienced no interaction with littermates and only seeing mum at feeding time, no interaction with other animals including people. The new owners keep the dog locked in a room most of the time, it gets no socialisation and it’s only interaction with people is to get chastised for any normal canine behaviours (driven by boredom and frustration) that it carries out. The end result here is a dog that reacts badly to most people.

In example 1 the genetic predisposition for loving people has been expressed and reinforced by the dogs early learning and environment.

In example 2 the genetic predisposition for loving people has not been expressed due to it’s early learning and environment. 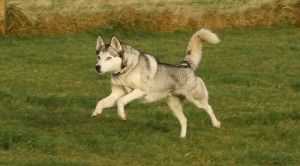 For thousands of years man has selectively breed dogs for certain traits or behaviours that they liked or in earlier times were required, like a dog to guard the home or village to give warning of strangers approaching or to protect their animals. More recently man has breed dogs for aesthetic reasons (looks) and for temperament so they make a good companion dog. There are obviously still many working dogs around today and their owners bring out and reinforce their desirable breed specific traits and behaviours in the course of their training and work.

It is only fairly recently in the dogs evolutionary scale that man has wanted a dog more for a companion animal than a working animal and the previous thousands of years of selective breeding for certain traits and behaviours, especially in some breeds, can give a modern dog very strong genetic urges to carry out certain behaviours. Dogs that have these strong genetic drives do not make good pets for new or inexperienced owners but they do make good working dogs or pets for experienced owners who understand and can give them a life that takes care of their needs. If a dog with these high drives does not get to satisfy the genetic urge they may well carry out other undesirable behaviours (in our eyes) out of boredom or frustration.

Also if a dog is carrying out behaviour that does in deed satisfy it’s genetic urges it will carry on doing it as it makes it feel good, the behaviour releases feel good hormones within the dog that make the behaviour self rewarding to the dog, in this case a dog may become obsessed with carrying out certain behaviours (it becomes a fixed pattern of behaviour) this may cause problems too for the inexperienced.

On my website the dogs that I do not recommend for the first time owner are indeed nearly all high drive dogs, driven by different genetic urges put there by thousands of years of previous selective breeding, these vintage genetic influences can vary from breed to breed and can take the form of prey drive, scenting, guarding, fighting, loving people, dominance, herding, nervousness and many others. As I said earlier though these are genetic predispositions to traits and behaviours and whether they do actually become expressed and end up part of the adult dogs repertoire will be affected by that particular dogs environment and early learning, if you are a first time owner then these sort of dogs may well prove to be too much to handle for you without continuous expert help/advice, really they are not for the new owner.

All of the above and more is covered in more detail on my website dogways so why not take a look, it’s free. Hope the above gives you a brief insight into breed specific traits and behaviours and what it could mean for you and your dog and gives you some encouragement to look further. Thanks for looking!