Hi All, many (not all) dog on dog, dog on people problems and other fears and phobias are caused by or significantly affected by lack of socialisation of the dog when young and throughout their life. Where you get your dog from whether a pup or a juvenile/adult will already be having a lasting effect on the future behaviour of your dog. The process of socialisation really starts as soon as a pup starts to interact with the environment around it. By the end of week two the eyes and ears are open, sounds are being made and reflex actions with some locomotion is taking place. By the end of week three the eyes have responses to light and moving stimuli and the ears (and pup) are responsive to loud noise. So really from end of week three onwards the pup is open to stimuli be they good or indeed bad (scary) and the later, especially noise related can have lifelong bad effect.

Where you get your dog from will have a major effect on your future dogs behaviour and so care must be taken. A good breeder or private owner will hopefully have already put your new best friend on the right road by raising them in a calm, safe and neutering environment. Mum and other litter mates want to be there as much is learnt from interaction between them, this time is of the utmost importance, more can be read about this on my website. Good breeders/owners should already have exposed your prospective pup to some of the novel non scary stimulus found in the following list. If they have not then the work you do on it will be paramount, but take it steady and calmly. You will be taking your new pup at weeks 8-9, definitely not earlier as they will lose out on learning from mum and litter mates. Once you get them home it’s up to you.

Throughout the socialisation process this should be top of your list. What we need to be doing is exposing your pup to some novel non scary stimulus in a safe and neutering environment. If you scare a pup badly not only may they become scared of what actually scared them in the first place they may also associate the same feelings to something in the environment in which it happened.

For instance, a pup is walking along the street and a car backfires right next to them, as it happened they were looking at a man in a hat, from that day on that dog is scared of not only bangs but also people with hats on, obviously this is only an example but it shows how pups/dogs can develop fear/nervous issues to something not connected to the initial scary stimulus through association. 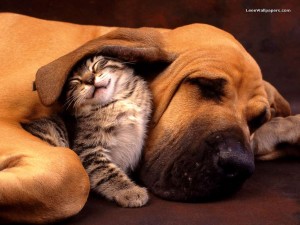 Exposing your pup to novel non scary stimulus does not involve firing a starting pistol next to them (obviously), what it does involve is exposure to:-

Other friendly dogs both male and female of different ages (family and friends dogs and other well known dogs, after their inoculations though).

Feeding your pup on different surfaces like carpet, wood, vinyl, concrete etc (will help them deal with new things later in life).

Taking them to different safe environments after their inoculations (places like the pet shop, family and friends houses, the vets for a jolly etc.)

Take them to some well run puppy socialisation classes, by well run I mean run by a person knowledgeable in canine behaviour with no huge older pups/juveniles that will give a bad association to the whole affair, these classes can be attended after your pups second inoculation. Classes carried out at the vets to give a good association to the vets would be advantageous. Book them well in advance (speak to your chosen vet).

Exposure to different looking things like people with hats on, disabled people if appropriate, large animals like cows and horses, vehicles etc.

Exposure to daily household noises and practices. If possible try to expose them to things at a lower level to start with, like the vacuum on a low level and at the other side of the room. Try not to expose your pup to full on close up scary noises for fear of issues developing.

The more non scary stimulus a pup is exposed to the more sound adult dog you should end up with but do not make it an all consuming mission on your part, do it gradually over several weeks and calmly.

If something does scare your pup the first thing they will probably do is look to you the owner for your reaction. Personally I think it is OK to very quickly reassure them with say a calming stroke to the head but do not go over the top with lots of reassurance as this may well tell them that what just happened was indeed very scary and something to be very worried about and may well sow the seeds for future problems.

Throughout the socialisation process always have a calm slightly jolly mood about yourself and do not push your pup into doing something that is obviously worrying them.

I hope this has given you an insight into the socialisation of your pup and the encouragement to find out more. Much more detailed information and advice about this and other subjects can be found on my website, please take a look, it’s free.